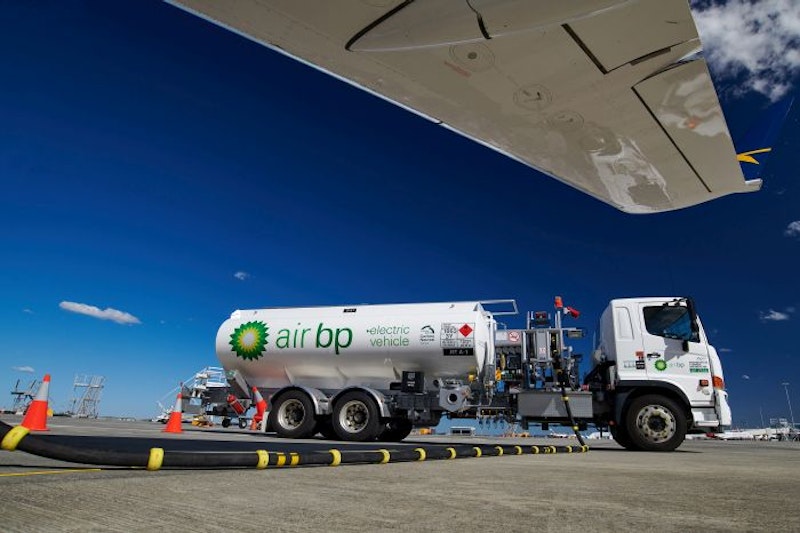 The first all-electric aviation refueller in Australia was put into operation this week - a SEA Electric SEA 500 EV which has been designed and engineered in Australia.
Built in conjunction with global aviation fuel products and service supplier Air bp and leading aviation specialists Refuel International in Melbourne, the vehicle will be based at Brisbane Airport, uplifting Jet-A1 for business and general aircraft at the busy international airport. The refueller can carry approximately 16,000 litres of aviation fuel, with all onboard pumps and functions fully electrified, with the management of the systems provided by the proprietary SEA-Drive® power-system.
This system has previously been adapted to electrify a wide range of ancillary functions, such as the hydraulic systems found on refuse vehicles, elevated work platforms, tippers and tilt trays, or the cooling units found in refrigerated delivery trucks. This latest adaptation sees the bulk of the energy for the truck devoted to the fuel delivery task, rather than propulsion for the vehicle. For further information see the IDTechEx report on Electric Motors for Electric Vehicles 2022-2032
"SEA Electric is proud to be partnering with Air bp on this world-leading project, which sets the standard for environmental credentials and performance, all while showcasing the possibilities of EV technology," said Tony Fairweather, SEA Electric's CEO and Founder. "Working airside on the tarmac has its own special suite of conditions when contrasted to a delivery truck on the open road, with the energy demands of the vehicle vastly different to the norm, however, leading criteria such as safety and reliability remain imperative. Of course, there are environmental benefits of converting to EV, with CO2 and other exhaust particulates eliminated, which makes for a healthier work environment at airports. Furthermore, this is the first step towards an airport becoming a Virtual Power Plant (VPP). Imagine the near future whereby every Brisbane airport vehicle is battery electric and networked to both renewable sources of energy for charging (such as roof-mounted solar) and also to the grid itself to deploy excess energy when the grid requires it. This is just around the corner."
"Transport makes up a significant portion of total emissions, with the adoption of pioneering EV technology, such as this aircraft refuelling truck, showing a great level of social responsibility," Mr Fairweather said.
The project is proof that Australian ingenuity and manufacturing is alive and well.
"Air bp has been collaborating with SEA and Refuel International for two years on the custom-designed and specialised electric refueller to meet exacting performance and safety requirements. We are delighted to launch the refueller at Brisbane Airport where we are responsible for fuelling 30 airlines and approximately 100 flights daily," said Daniel Tyzack, Managing Director, Air bp Asia Pacific. "Our work reflects bp's ambition to become a net zero company by 2050 or sooner and to help the world get to net zero by working with our customers to help decarbonise."
For Refuel International, the vehicle is the latest in a long line of projects working with Air bp.
"Refuel International are very proud to have developed Australia's first electric aviation refueller in partnership with Air bp and SEA Electric," said Geoff Pinner, General Manager for Refuel International.
Details on SEA Electric's Australian range, its wide array of applications, plus its nationwide dealer network, can be found at www.sea-electric.com/en_au.
About SEA Electric
SEA Electric is an Australian company with a global reach specialising in the assembly and 100% electrification of commercial vehicles worldwide. Dealing directly with vehicle users and working alongside automotive OEM's, SEA Electric supplies and licences patented technology. SEA Electric was founded in 2012. After four years of product development and testing, SEA Electric launched its commercial operations in early 2017, triggered by the reduction in battery kWh pricing, allowing for commercial feasibility in offering electric drivetrains to the global market.
Source and top image: SEA Electric