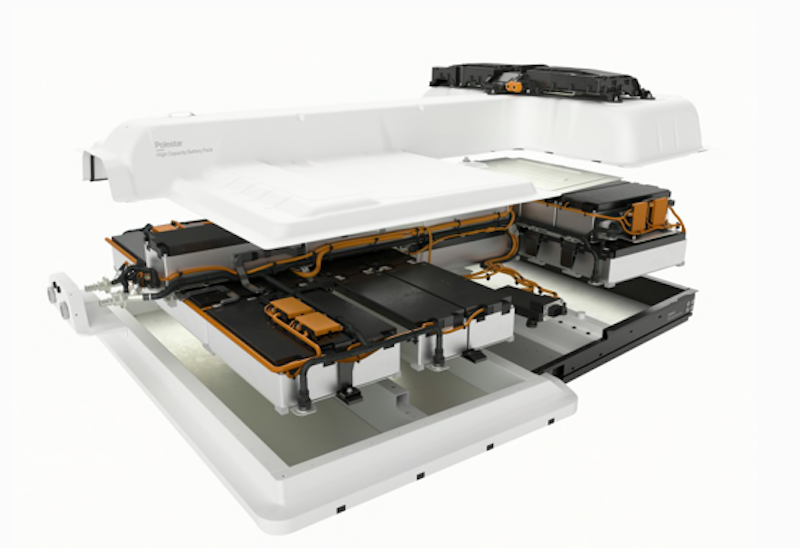 The Swedish electric car maker Polestar will provide battery and charging systems for Candela's highly efficient flying boats. The battery deal will enable Candela to scale up production swiftly, bringing mass-market electric boats one step closer to reality.
In a watershed moment for electrification at sea, the two Swedish companies Polestar and Candela have ventured into an agreement where Polestar will supply the battery and charging systems for Candela's revolutionary hydrofoiling speedboats. The deal lets Candela tap into state-of-the art automotive battery technology and scale up production of its best-selling electric boats.
"To make electric boats mainstream, we need to build thousands of boats every year. Working together with Polestar, we're able to bring the scale of production and world class engineering from the automotive industry to the marine sector," says Gustav Hasselskog, Candela CEO and founder.
By combining Polestar's batteries with Candela's pioneering electric hydrofoil technology, both companies aim to propel the growth of sustainable electric mobility in society. For further information see the IDTechEx report on Electric Leisure & Sea-going Boats and Ships 2021-2040.
"I am fascinated by way Candela's boats glide elegantly and efficient through, or better, over the water - amazing proof of the great aesthetics and experiences modern, sustainable technology can create. That Polestar will be part of future projects with Candela by supplying an essential part for the innovative propulsion of their boats, is awesome. As a battery supplier to Candela, we can help drive the transition to cleaner oceans and lakes, and electrify waterborne transport," says Thomas Ingenlath, Polestar CEO.
The deal between the two Swedish companies is an attempt to overcome the two major hurdles for electrifying boating. The first hurdle is the massive energy consumption of conventional powerboat hulls, which so far has resulted in poor performance of electric boats. This obstacle has been cleared by Candela's hydrofoil technology that cuts energy usage of powerboats by up to 80%.
The second hurdle has been the prohibitively high cost of marine batteries for electric boats. Electric boatbuilders typically have so far relied on smaller, boutique vendors of marine battery packs. Scarcity and high unit costs of these packs are two factors that have prevented electric boats from achieving parity with ICE vessels.
"Thanks to the partnership with Polestar, we're able to secure state-of-the-art battery packs for our production ramp-up. As the number of electric vehicles increases worldwide, a steady battery supply will become increasingly important to hold a competitive edge and allow us to compete with combustion engine boats," says Candela CEO Gustav Hasselskog.
Candela's hydrofoil craft are the fastest and longest-range electric boats on the market. Flying above the water's surface at 30 knots, the Candela C-8 and P-8 Voyager use up to 80% less energy than conventional boats of the same size, thanks to much reduced water friction. The computer-actuated foils also give them "superpowers", such as superior seakeeping, zero wake and a silent ride.
After launching the high-volume sales Candela C-8 leisure boat during the fall 2021 and shortly after raising €24 million from EQT Ventures, the Swedish boat maker is now moving into a new production plant where the P-series commercial vessels and C-series leisure boats will be produced. The battery supply agreement is just the beginning of a broader intended partnership between Polestar and Candela, with both companies committed to exploring further opportunities for future collaboration.
About Candela
Candela is a Swedish electric boat company whose mission is to speed up the shift to fossil fuel-free lakes and oceans. Using computer-guided hydrofoils - underwater wings that lift the hull above the surface, thereby overcoming the friction of water - Candela's craft use up to 80% less energy at high speeds than traditional motorboats. In addition to longer range and better performance than other electric boats, Candela's craft have several benefits over conventional ICE boats. With minimal noise, no wake and zero emissions, Candela's craft combine a light environmental footprint with better passenger comfort and a thrilling drive experience. Candela was founded in 2014 by engineer Gustav Hasselskog and introduced its first production model, Candela C-7, in 2019. With a range of 50 nautical miles at 20 knots, the C-7 set several world records for electric boats. The limited production run of 32 units ended in 2021. In 2021, Candela launched the bigger, high-volume production Candela C-8, which is designed to make electric boats mainstream. With space for eight passengers, it has a range of 50 nautical miles at 22 knots and a top speed of 30 knots. Powered by the Candela C-POD, an electric pod motor developed in-house by Candela's 50-strong engineering team, it is 400% more efficient than other powerboats on the market. With more than 150 units ordered to date, the C-8 is currently the best-selling electric premium boat. In 2022, Candela is launching the Candela P-8 Voyager taxi boat and the P-12 Shuttle electric ferry, which will bring the company's revolutionary electric hydrofoil technology to commercial vessels.
Source and top image: My News Desk