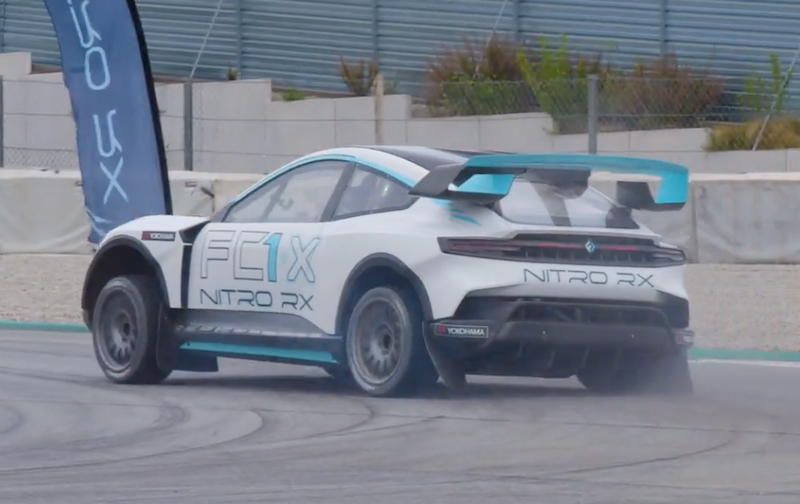 The Nitro Rallycross global series kicks off in the UK next weekend. The series features the revolutionary FC1-X, a groundbreaking electric vehicle which can produce the equivalent of 1,070 horsepower and accelerate 0-60 mph in just 1.4 seconds - faster than an F1 car. Some info on Nitro Rallycross below. Some info on the FC1-X is also below.
About Nitro Rallycross
Nitro Rallycross is a disruptive new force in motorsport, combining the intense racing of rallycross with the big air thrills of Nitro Circus. Created by Travis Pastrana - who, alongside his numerous achievements on two wheels has won six American rally titles and held the world record for the longest car jump - Nitro RX's limit-pushing DNA has given rise to its "cars that fly, tracks that thrill" mission statement. Featuring the revolutionary FC1-X, a groundbreaking electric vehicle which can produce the equivalent of 1,070 horsepower and accelerate 0-60 mph in just 1.4 seconds - faster than an F1 car, Nitro RX is a high adrenaline battle on challenging courses packed with jumps topping 100+ feet, banked corners and steep sand berms. In addition to the FC1-X battling in the new Group E division, Nitro RX will feature a variety of competition classes, including Supercar, NRX Next and CrossCar fields.
After two standalone races in 2018 and 2019, Nitro RX grew into a championship series for the first time in 2021. Industry buzz soon built as well, attracting decorated drivers from motorsport's upper echelons including Jenson Button (F1), Kyle Busch (NASCAR) and Chase Elliott (NASCAR), to strap in and take on Nitro RX's hair-raising tracks. Now, as Nitro RX expands once again into a global series, the best drivers in the world - including homegrown Bristol hero Oliver Bennett taking on decorated international competitors like Norway's Andreas Bakkerud, Sweden's Kevin Erkisson and more - are descending on the UK's legendary Lydden Hill Race Circuit for its opening round 18-19 June. In addition to the first step toward the inaugural Nitro Rallycross world championship, this race carries special significance: Lydden hosted the first ever rallycross event in 1967. Now over a half-century later, Nitro RX is ready to launch its exciting new chapter. For further information see the IDTechEx report on Electric Motors for Electric Vehicles 2022-2032.
FC1-X
The all-new FC1-X is the most powerful rallycross car ever built, producing the electric equivalent of 1,070 peak horsepower. It will be driven this weekend in demos at the ROC Snow + Ice. Created by First Corner, LLC, in collaboration with QEV Technologies and Nitro RX, the FC1-X's groundbreaking design delivers the ultimate performance across the full range of rallycross conditions. It has been built without compromise to meet the vision of Nitro RX founder Travis Pastrana and deliver the best cars, on the best tracks, with the best racers anywhere in the
world.
Pastrana says, "Our goal for the FC1-X was to create the best rallycross car possible. One that can put down more power than anything seen in competition and durable enough to thrive in the Nitro Rallycross. With more torque, acceleration and top speed than any gas-poweredSupercar. The combined speed and strength of the FXC1-X definitely pushes the envelope on performance. This will allow more aggressive racing on more challenging tracks. Exciting the drivers and thrilling the fans. 2022 is going to be awesome."
Boundary-Breaking Performance:Powered by four Magelec Propulsion axial flux motors, the FC1-X generates the equivalent of 1,070 horsepower (800 kW) and is capable of accelerating from 0-60 in just 1.4 seconds. This is faster off the line than an F1 car, producing nearly 2g of acceleration from a standing start. That power will also propel the FC1-X across 200-ft gap jumps, through high banked dirt turns and over multiple surfaces. The vehicle's regenerative braking system then returns that power to the battery. An innovative driveshaft system offers conventional handbrake operation - a world first in electric motorsport and critical for rallycross action. Carbon composite bodywork over a space-frame structure enhances driver safety and reduces overall weight. The FC1-X also features adjustable aerodynamics to tune flight balance on Nitro RX's enormous jumps and nearly 12 inches (300 mm) of suspension travel to soak up big landings. Adding to its endurance, the FC1-X boasts a battery range that will see it through multiple heat races before needing to recharge.
Upcoming Nitro RX "Group E" Launch
The FC1-X will flex its muscles in Nitro RX's new top "Group E" division, coming this year. The upcoming season will build on 2021's successful run with an expanded calendar now featuring international stops for the first time. Just as the "banned from rally" Group B cars (infamously known as the Killer B's) set the rallycross world ablaze in the 1980s, Nitro RX's new Group E class is poised to make another quantum leap, demonstrating to the world the massive performance potential of electric vehicles unleashed by the fastest rallycross cars ever seen.
Source and top image: Note by Note Media