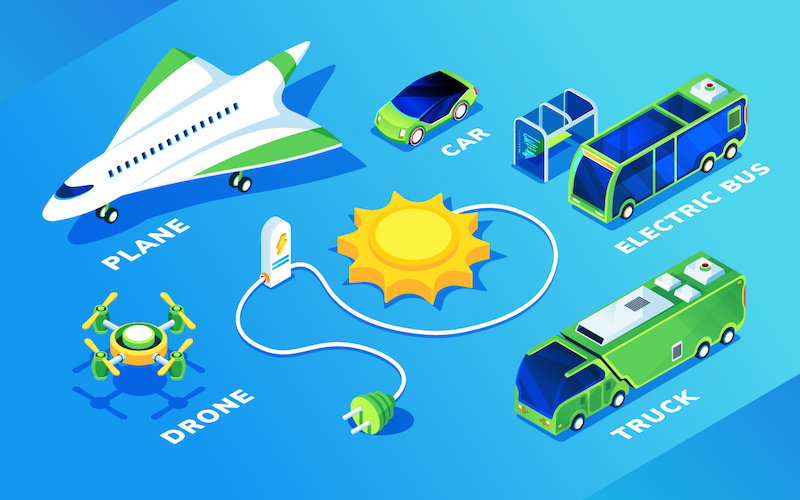 Elon Musk once made a prediction that every form of transport, with the exception of space-faring rockets, will become electric. This prediction is starting to materialize as markets for electric cars, trucks, buses, boats, two-wheelers and air taxis reached new heights in 2021. 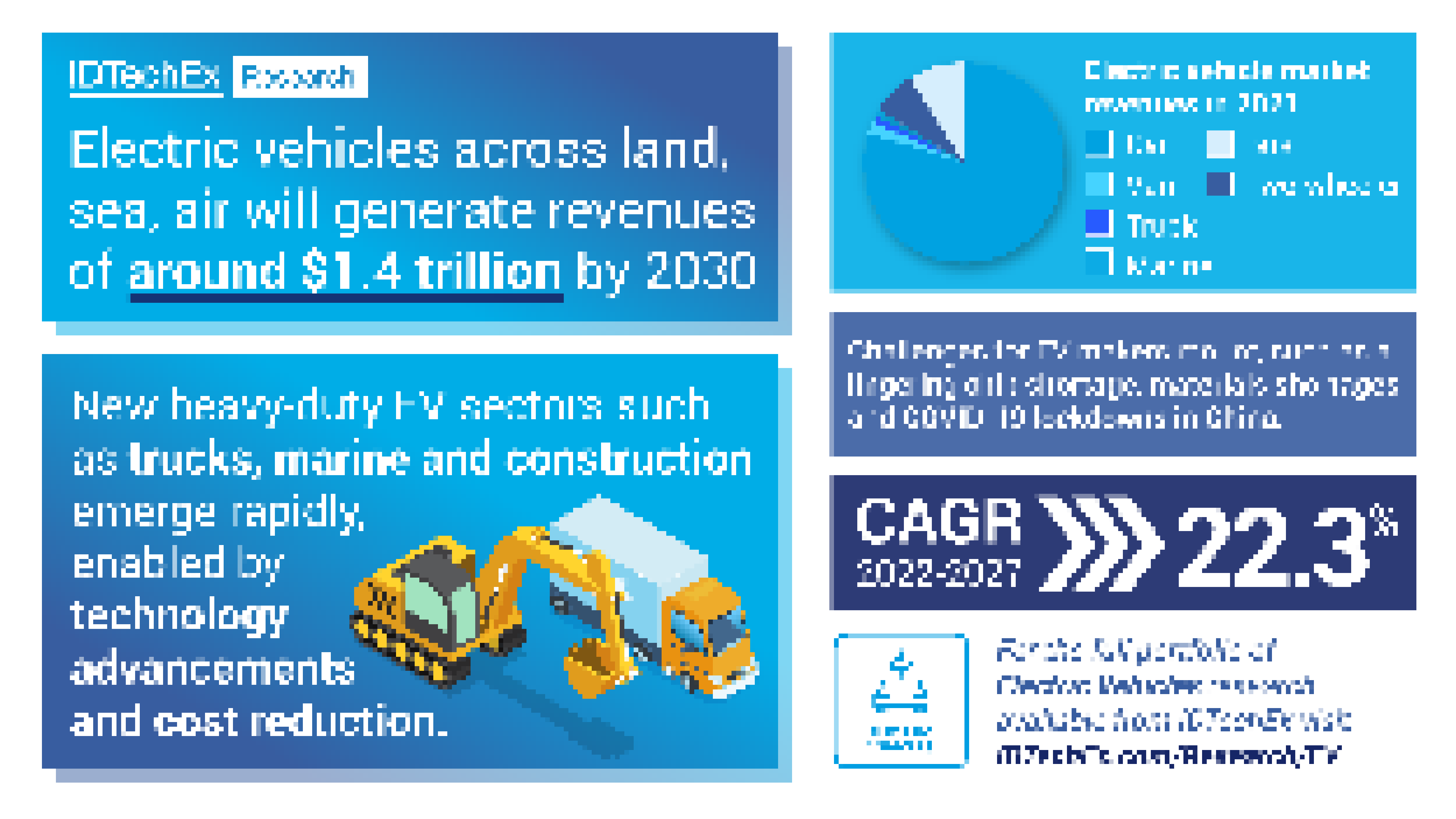 Source: IDTechEx
IDTechEx's latest electric vehicle (EV) master report "Electric Vehicles: Land, Sea & Air 2022-2042" covers eight transport markets broken into over 90 forecast lines, including battery-electric, fuel cell, and hybrid vehicle unit sales, battery demand (GWh) and market revenues ($ billion).
Electric cars are the largest market today, with sales more than doubling in 2021 to over 6.4 million. IDTechEx predicts this will still be true in twenty years, with cars accounting for 79% of EV market revenues and 83% of battery demand. The reason why is a matter of scale - cars have long been the focus of government policy for their popularity and large contributions to road emissions. Around 81 million cars were sold globally in 2021 compared with 3.3 million medium and heavy trucks and 0.2 million city buses.

Source: IDTechEx - "Electric Vehicles: Land, Sea & Air 2022-2042"
Despite record growth, the tragic war in Ukraine is creating new challenges for automotive and electric vehicle markets on top of two highly challenging and unpredictable years caused by the pandemic.
As economies have opened up after covid-19 restrictions, and sanctions against Russia have constrained oil and gas supply, electricity prices and gasoline prices have climbed. This brings electric vehicle markets to the forefront, but at a time when automakers grapple with a lingering chip shortage, new covid lockdowns in China, increased raw material prices, and shortages of auto parts produced in Ukraine, like wire harnesses.
Many electric vehicle makers have started to react, increasing prices or delaying and limiting production. The price increases are not trivial. In 2020, Tesla's base Model 3 cost $39,990 - in 2022 it is $46,990. In March, Rivian announced it would increase the price of its models by up to $14,500 (R1T), before facing a customer and investor backlash. Beyond the start-ups, automotive giant VW announced it has effectively sold out of electric vehicles in the US and Europe for 2022.
The battery remains the largest cost component of the vehicle, and climbing costs of battery raw materials, particularly lithium and nickel, are a factor behind the increases. This is driven by shortages and new lockdowns in China as well as the Russia-Ukraine war - most of the world's Lithium is processed in China, and Russia accounts for around a fifth of global class 1 nickel supplies. As shortages continue, and supplies of electric vehicle parts are eaten up by the automotive sector, this will have an impact on non-automotive sectors which use the same technologies.
An example is electric truck markets, which IDTechEx predicts will have the second-largest battery demand by 2042 (see "Electric Vehicles: Land, Sea & Air 2022-2042" to find out more). Tesla's Semi, a battery-electric class 8 long-haul truck, was originally to be produced in 2020; the target is now 2023. The Semi requires new large-format 4680 cells, but limited battery production has been prioritized for high-in-demand cars which generate more profit per kWh. The delays have allowed OEMs like Volvo, Daimler, and PACCAR to catch up with Tesla, companies now primed to go into series production with new BEV truck models. Yet they might face similar problems.
Another example is electric leisure boats. Sales surged in 2020 and 2021, driven by customers spending more time away from the office. Often, automotive battery cells are used. For example, BMW has supplied Torqeedo, an electric outboard manufacturer, and Corvus Energy, a commercial marine battery pack supplier, predominantly uses automotive-grade NMC pouch cells. As shortages continue, the industry will have to look at new deals with new suppliers.
While non-automotive sectors demand fewer batteries, they still demand them. Improving the efficiency of the overall EV powertrain, rather than focusing on pure battery development, will be key - this means silicon carbide power electronics, more efficient motors, 800V platforms, solar bodywork, and less cabling.
What is clear to IDTechEx is that, despite the mounting challenges, demand for electric vehicles remains very strong from both consumers and governments. As the challenges mount, the transition continues.