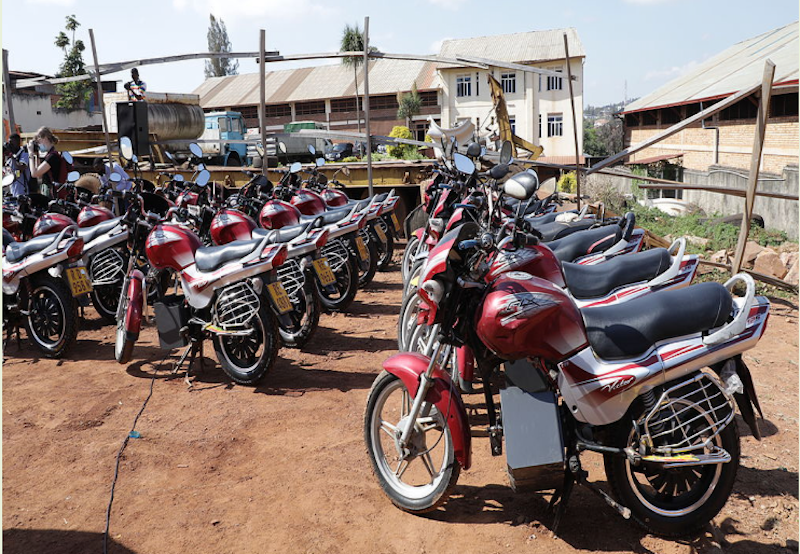 The Government of Rwanda in partnership with the United Nations Development Programme (UNDP) launched a project to put more electric motorcycles on Rwanda's roads. The project aims to gradually phase out the use of traditional petrol-powered internal combustion engine (ICE) motorcycles by converting them to electric bikes, reducing greenhouse gas emissions and air pollution.
This project was initiated by the Rwanda Environment Management Authority (REMA) with financial and technical support from UNDP through the Poverty Environment Action for SDGs Project. REMA has partnered with a local company, Rwanda Electric Mobility Ltd, to launch the pilot phase in Kigali.
According to Rwanda's Third National Communication submitted to the United Nations Framework Convention on Climate Change, by 2018 greenhouse gas emissions from road transport were dominated by cars and motorcycles. Rwanda's National Greenhouse Gas Inventory also shows that taxi motorcycles are the second biggest emitter of greenhouse gas emissions, estimated at 427.45 Gg CO2 eq (32.42% of emissions from road traffic). For further information see the IDTechEx report on Electric Two-wheelers 2021-2041.
During a "Youth Meet the President" event held in August 2019, President Kagame shared a plan to convert internal combustion engine (ICE) motorcycles to electric motorcycles in Rwanda. This groundbreaking project is in line with that announcement and Rwanda's ten-year climate action plan (Nationally Determined Contribution) to reduce 4.6 million tonnes of carbon dioxide by 2030 and is aligned with Rwanda's National Strategy for Transformation.
The initiative will support efforts to phase out polluting internal combustion engine motorcycles, particularly the motorcycle taxi fleet, which accounts for more than 80% of motorcycles in Rwanda. It will also help to achieve Rwanda's target to become a carbon neutral economy by 2050 and is another milestone in promoting e-mobility in Rwanda.
Donald Kabanda, CEO of Rwanda Electric Mobility Ltd, explained the economic benefits: "The retrofitted e-motorbikes are equipped with two batteries, which are easily swappable. One full charge costs Rwf 900 and provides enough range for a 50km trip, while one litre of petrol costs more than Rwf 1,000 and covers only 25km. This means that a retrofitted e-motor-taxi operator will save more than Rwf 100 per charge compared to petrol-fuelled motor-taxi and travel twice the distance," he said.
According to the Ministry of Infrastructure, Rwanda has more than 100,000 motorbikes officially registered, with 46,000 operating as moto-taxis. The City of Kigali alone has 26,000 internal combustion engine motorcycle taxis, which pollute the air we breathe. This has serious effects on human health and the environment, as is a leading reason why the government is taking action on the issue.
"Addressing air pollution not only benefits our environment and limits climate change, but also improves the health of Rwandans. This innovative retrofitting pilot project will help us to understand the best approaches and technologies to adopt as we build a green and climate resilient Rwanda and meet our international obligations," said Juliet Kabera, Director General of the Rwanda Environment Management Authority.
Mr Maxwell Gomera, the Resident Representative of UNDP Rwanda, applauds the initiative and reiterates UNDP's commitment to support the country's efforts to reduce dependency on fossil fuels in the transport sector.
"Rwanda is debunking the myth that a country has to choose between development and green growth. Using a smart combination of finance and policy, we are pioneering a vision of development without fossil fuels, effectively detoxing our transportation system," said Gomera, adding that "Burning fossil fuels causes pollution, respiratory diseases and costs money over time. Going electric zaps those problems before they can cause damage, putting our economy and society on a greener, healthier pathway."
"Government of Rwanda through the Cabinet has taken steps to create an enabling environment by proposing fiscal and non-fiscal incentives to unlock electric mobility transition. Much more will be refined, informed by lessons learned from such pilot initiatives of retrofitting what could be heading to waste disposal sites into a well-functioning vehicle with zero emissions, ready for service" said Minister of Environment, Dr. Jeanne D' Arc Mujawamariya.
To date, 71 of the initial 80 motorcycles have been retrofitted. At the end of the pilot phase, retrofitting services will be available to motorcycle owners across Kigali at an affordable cost. Motorbikes with an age of three or more years will be eligible for retrofitting. This process aims to transform the bikes into "as new" vehicles with all parts used to retrofit being new.
At least 40% of motorcycles, especially moto-taxis, will be eligible for the programme. Rwanda Electric Mobility Ltd aims to retrofit up to 30,000 motorcycles over the next five years.
The project supports existing initiatives to manage air pollution, including a countrywide air quality monitoring system whereby Rwandans can access real-time air quality information via a website and mobile application.
A recent study on "The Impact of Scaling Up Electric Motorbikes in Rwanda" indicated that the transition to electric motorcycles could save Rwf 9 billion annually due to a reduction in fuel imports. Rwanda spends approximately Rwf 23 billion on importing fuel every year. Electric motorcycles would spend only Rwf 14 billion on electricity annually, which is produced domestically.
Approximately one in five trips in Kigali is taken by petrol-fuelled motorcycle taxis, contributing to poor air quality, high demand for imported fuel, and rising greenhouse gas emissions that contribute to climate change.
Retrofitting consists of taking a petrol engine and other key components out of the motorbike and replacing them with electric ones. The bike is reconfigured and fitted with electric parts, which makes it a zero emissions vehicle on the road.
Rwanda Electric Mobility Ltd operates a central charging station in Kigali and distributes fully charged batteries to its exchange (swapping) stations, which are located in Nyabugogo, Remera and Kicukiro.
Source and top image: Rwanda Environment Management Authority (REMA)