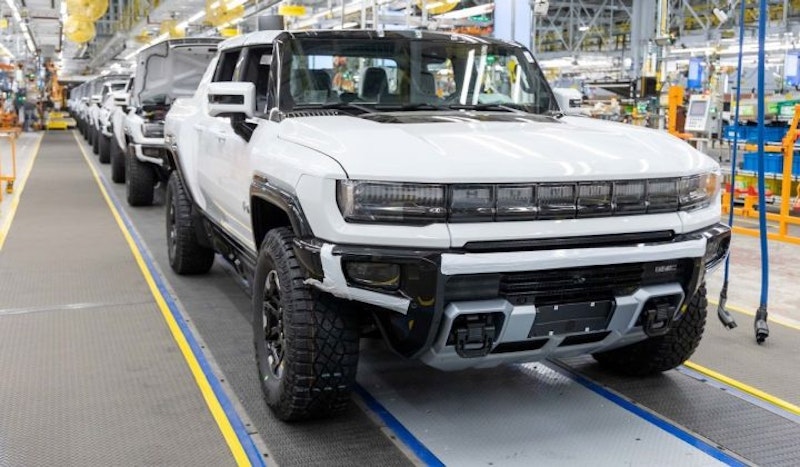 General Motors marks a major milestone in its commitment to an all-electric future on the opening of the Factory ZERO EV assembly plant. Production is now set to begin at the former Detroit-Hamtramck assembly plant, less than two years after GM announced the massive $2.2 billion investment to fully renovate the facility to build a variety of all-electric trucks and SUVs.
"GM's U.S. manufacturing expertise is key to achieving our all-electric future," said GM Chair and CEO Mary Barra. "This is a monumental day for the entire GM team. We retooled Factory ZERO with the best, most advanced technology in the world to build the highest quality electric vehicles for our customers."
The name Factory ZERO reflects the significant role the facility plays in advancing GM's vision of a world with zero crashes, zero emissions and zero congestion. Factory ZERO will be home to the 2022 GMC HUMMER EV Pickup, 2024 GMC HUMMER EV SUV, Chevrolet Silverado EV and the Cruise Origin, an all-electric, self-driving, shared vehicle. When fully operational, Factory ZERO will employ more than 2,200. For further information see the IDTechEx report on Electric Vehicles: Land, Sea and Air 2021-2041.

The debut of the Ultium Platform at Factory ZERO

All Factory ZERO EVs will be built on GM's Ultium Platform, the heart of the company's EV product strategy. The Ultium Platform encompasses a common vehicle architecture and propulsion components like battery cells, modules, packs, drive units, EV motors and integrated power electronics, and is fundamental at plants where EVs are produced.
Through the Ultium Platform, GM will realize a strategic value chain shift across its network of vehicle assembly plants as the company is able to commonize and streamline machinery, tooling and assembly processes. This flexibility enables lower capital investments and greater efficiencies as additional assembly plant transformations occur.
GM retooled Factory ZERO for EV production for two-thirds the capital required to build a greenfield plant, making the facility a model for future GM facility renovations. As the company continues its transition for an all-electric future, GM will avoid up to $15 billion in capital costs by 2030 through the renovation of existing manufacturing facilities versus ground-up construction. The figure grows to $20 billion to $30 billion at 100 percent transition of GM's manufacturing facilities to support EV production. That capital can be redeployed more strategically for additional customer-facing products, services and technologies.
Along with the capital advantages, GM's commitment to renovating its existing network of manufacturing facilities during the EV transition also saves time. An accelerated launch and production start allow the company to get new, innovative EVs to customers sooner. Pre-production of the 2022 GMC HUMMER EV pickups began at Factory ZERO this fall and the first GMC HUMMER EVs are on track to be delivered to customers by the end of the year.
"To meet our ambitious EV transition, GM's North American EV vehicle assembly capacity will reach 20 percent by 2025, and then 50 percent by 2030," said Gerald Johnson, GM's executive vice president of Global Manufacturing and Sustainability. "Factory ZERO serves as a model for transitions that will take place at other factories around the world in the coming years."
Using virtual tools and working in parallel with production engineering teams, GM cut the manufacturing launch time in half - from two years to less than one - creating a competitive advantage. By comparison, greenfield assembly plant planning and construction could take up to four years, from site selection to vehicle production.
GM estimates that 80 percent of the assembly process for an EV is the same as that for conventional vehicles. This is another driver of speed for GM. The company has refined and perfected its own standardized manufacturing processes over many decades, and will launch its expanding portfolio of EVs faster, with superior quality and a lower cost.
GM's Factory ZERO team is backed by more than 90,000 industrial problem solvers on GM's global manufacturing team, who have 1.4 million years of collective experience. They are managing an average of 11 major launches each year, both internal combustion engine and EV. As a result, GM can produce an EV in the same number of working hours it takes to build an ICE vehicle.
"Our people are GM's true competitive advantage — an advantage you simply can't buy or quickly build," said Johnson. "At Factory ZERO, we are building on that experience with the training that will deliver EV and AV launch success with safety, quality and speed while continuing to drive down cost per unit."
As an EV assembly plant, Factory ZERO plays a direct role in GM's commitment to eliminate tailpipe emissions from new light-duty vehicles by 2035 and become carbon neutral in its global products and operations by 2040. The company has already committed to invest $35 billion in electric and autonomous vehicles and plans to introduce more than 30 EV models by 2025. Factory ZERO serves as a real-world proof point for GM's commitment to running its business in a sustainable manner.
Factory ZERO highlights include:
Through Factory ZERO, GM is showcasing its manufacturing capability and readiness for what will be a fundamental shift in mobility as the company transitions to an all-electric future.
Source and top image: GM